The Permian Basin is booming. Recent estimates claim that Texas is on track to becoming the no. 3 oil producer in the world, behind only Russia and Saudi Arabia. Let that sink in for a moment.

While that sounds great, it’s important to remember that the Permian Basin isn’t without its challenges.  It is a remote, hot, relatively flat, and unforgiving area without many of the creature comforts our modern lifestyles have accustomed us to. While it is possible to live without wifi, (I promise you it is), perhaps the biggest challenge is electricity. The Permian Basin is BYOP (Bring Your Own Power). These remote areas simply don’t have utility power, so oil wells, frac sand mines, administrative offices and man camps for workers have to rely on generators. 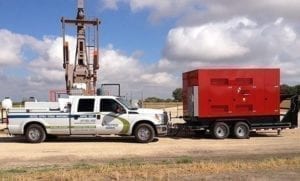 One thing the oil and gas industry is used to is government regulation, and of course, there is a regulation pertaining to generators. In 2012, the EPA introduced emissions requirements for off-highway diesel engines, known as Tier 4, that affect new and remanufactured engines. Tier 4 compliant engines significantly reduce emissions of particulate matter (PM) and oxides of nitrogen (NOx) to near-zero levels. Relative to previous emissions standards, Tier 4 compliant engines can reduce emissions by over 95 percent.

While everyone likes clean air, Tier 4 generators can be expensive to operate.  Not only is diesel expensive, but it needs to be transported to the generators and stored.  In a high demand situation like the Permian Basin, supply is a concern. If you run out of fuel, your whole operation suffers. Fortunately, there is a more reliable and cost-effective solution.

Natural gas is the cleanest-burning conventional fuel for power generation. It produces up to 10 percent less greenhouse gas emissions than heavier hydrocarbon fuels, making it cleaner than diesel according to the EPA.  Natural gas generators are also more efficient than diesel generators and have been shown to offer total cost savings of 40-45 percent compared to diesel units. Natural gas also burns approximately 85 percent cleaner than diesel helping to reduce the industry’s carbon footprint. But perhaps the best part is that it is readily available in the Permian Basin.

When crude oil is extracted and produced from oil wells, raw natural gas is also brought to the surface. Right now, there simply aren’t enough pipelines or other methods of transportation available to transport it for use, so most companies flare off this byproduct as waste.  Why not put that byproduct to use to power your generators?

Of course, it’s not as simple as that. Raw natural gas from oil wells contains water and other contaminants that must be removed before it can be used.  To do so, a gas scrubber is installed between the generator and the natural gas supply. The gas scrubbing process removes water and oil condensates from the raw natural gas, so it can be used as fuel for power generation rather than burned as waste.

Another factor to consider when choosing between natural gas generators and diesel generators for your well site is how much load, or how much power you will use from your generators. Generators at well sites are the only source of power (aka Prime Power) and therefore run 24/7. It is recommended that diesel generators operate with a minimum load of 80 percent of the generators maximum load when used in prime power applications. Running them under a lighter load for long periods of time results in “wet stacking”; a condition that sends unburned fuel and soot into the exhaust system. Over time, this soot can reduce the life of the engine and require more frequent maintenance. The use of a load bank to consume the excess energy reduces wet stacking but can waste a considerable amount of fuel. As an alternative, natural gas generators, which burn hotter than diesel, do not experience such problems with unburned fuel and wasting even if they are run at a lighter-than-optimal load.

It’s easy to see why natural gas generators are a practical solution for prime power needs in remote areas like the Permian Basin.  They are a cleaner, more efficient, cost-effective option with a readily available fuel source.

For more information about natural gas generator sales and rentals with preventative maintenance services, please contact Total Energy Solutions at (877) 835-1070 or contact us.